A freeway separates this refinery's process units from its storage and blending facilities. Piping, electrical power cables, communication cables, and other utilities are installed under the freeway, connecting the areas. The interconnecting lines involve both continuous and intermittent operations, including unit feed and rundown lines, blend component lines, and receipt and delivery lines. SPEC developed alternative concepts to allow the staged replacement of these lines while keeping the critical systems in continuous operation. Upon approval of the recommended approach, SPEC provided detailed engineering and design for the initial phase of the replacement plan. Extensive research was performed, including the use of ground penetrating radar (GPR), to identify substructures and their locations to validate the selection of the alternative design and the locations of the proposed casing, vault, piping, and piping connections. Laser scanning was used in the 3-dimensional modeling and design of existing and proposed piping and connections, facilitating refinery review and approval and creation of the construction drawings.

The design provided for installation of a 160-foot, 42-inch steel casing under the freeway. This casing contained 10 lines, each with a sub-casing, and vaults at each end, outside of the freeway right-of-way. Sub-casings were provided for each line to facilitate the replacement of an individual line, if desired in the future. The casing was designed to allow installation by jack and bore, but due to field conditions including ground water and uncertain soil condition, microtunneling was used to install the outer casing. After installation of the vaults and sub-casing assembly, the individual lines were installed and connected to existing piping per the tie-in plans.

Existing jumpers were removed, planned outages were accounted for, and future plans were also considered in routing the above ground piping. Some connections required hot taps and alternative valve configurations in order to make the tie-ins and commission the new lines without interrupting service.

SPEC also provided construction management support services, responding to and coordinating any field change requests or issues raised by the contractor or the client. 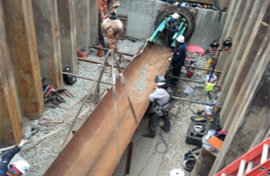 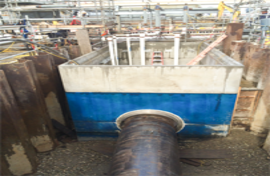 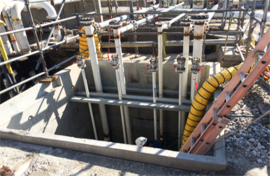